10 Female Entrepreneurs Who Are Slaying the Game Right Now

10 Female Entrepreneurs Who Are Slaying the Game Right Now

Women currently hold only 4.2% of the CEO positions in America’s 500 biggest companies, according to the 2016 Fortune 500 list. That statistic makes me mad, because there are so many talented women out there—and they deserve a chance at the top jobs. Instead of ranting about gender disparity, though, I want to focus on the women who have taken success into their own hands. The following female entrepreneurs have worked hard to build and lead successful companies, and they’re kicking butt in the business world. I’d love to see all of them on the Fortune 500 list in the next few years.

After meeting at Harvard Business School, Katia Beauchamp and Hayley Barna teamed up to start Birchbox in 2009. Their company, one of the first subscription boxes, delivers sample-sized beauty products by mail. In 2015, Barna stepped down from her co-CEO position to become the first female partner at the venture capital firm First Round. She remains on the Birchbox board, but Beauchamp is now the sole CEO. Among the things they’ve learned along the way:

“Don’t be afraid to ask questions, especially of your customers. Feedback and the willingness to improve are extremely valuable.“

I am a big believer in dry shampoo and this one from @kloraneusa was one of the first! It’s a spray powder, which I love bc powder is what works best for me. I want product that really absorbs and makes the hair look and feel lived in, but not dirty. —@katiawb

Emily Weiss was working at Vogue when she started a blog called Into the Gloss, sharing interviews with glamorous women about their favorite products. The site grew, and Weiss launched her own product line, Glossier, in 2014. The brand has a very close relationship with its customers, and incorporates their ideas as they expand the line. This year, Glossier opened a retail store in Manhattan. Weiss told Racked,

“I think trusting your intuition is important. Over and over again, that’s proved itself to me, that you always sort of know the right answer.“

“Thank you for being a part of this story—the reason for our being—and for writing this book with us. I believe it’s still only just the beginning.” Our Founder + CEO @emilywweiss announces Glossier’s latest round of funding and the next stage of our growth on @intothegloss ??

Alexandra Friedman and Jordana Kier met through mutual friends in 2014, and worked together to start Lola, a company that delivers organic cotton tampons. Friedman and Kier were disturbed that many tampon companies won’t reveal their ingredients, and wanted to give women a safer option. In 2016, the company attracted $3 million in seed funding. Kier told Bird,

“Nothing is ever as scary as you think it is. If you have an idea, then you’ve got to give it a shot.” 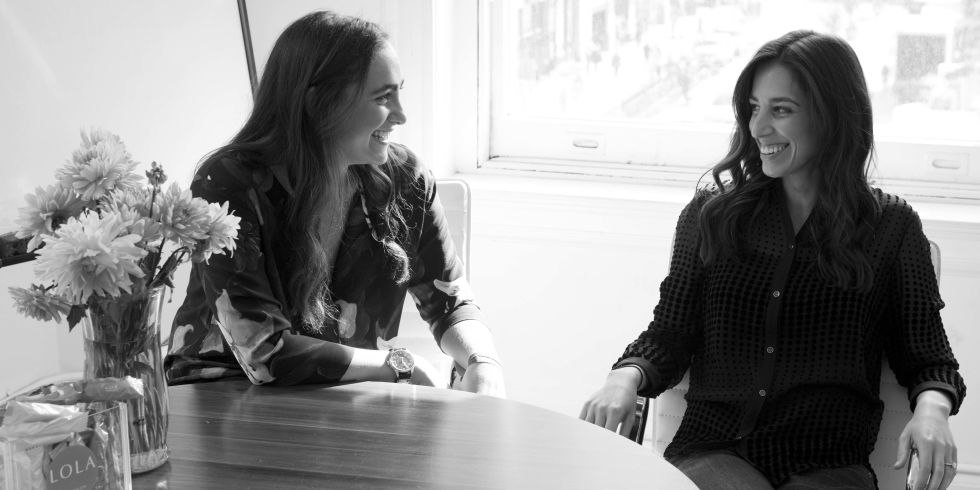 Jennifer Fleiss and Jennifer Hyman came up with the idea for a website that rents designer clothing and accessories at Harvard Business School in 2008, and they launched Rent the Runway the following year. In 2016, they added Unlimited, a monthly subscription service. Fleiss and Hyman also started Project Entrepreneur, a series of hands-on workshops to help other women get their businesses off the ground. Fleiss told Forbes,

“My advice to anyone looking for funding is to find a way to show your impact. Don’t just tell people about it.“

Danielle Weisberg and Carly Zakin met while studying abroad in Rome, and they later worked together at NBC News, where they got the idea to start The Skimm. The daily email offers current news in a straightforward, approachable format aimed at Millennials. It now has four million subscribers. In 2016, Weisberg and Zakin launched a spin-off calendar service and a holiday gift box. In a post on Medium, they wrote,

“We have tried to celebrate taking chances. Because if we are taking risks and sometimes failing, it means we are experimenting and iterating.”

Look ma, no chill. Because @klgandhoda. Thanks @jack_and_suzy for talking #SkimmLife with us at HQ! Full video in Stories. ?

Katrina Lake also founded her company while at Harvard Business School. Stitch Fix is an online personal shopping service that sends subscribers five items of clothing based on their personal style, and lets them choose which ones they want to buy. Lake started the company in 2011, and in 2016, she launched a shopping service for men. According to Forbes, Lake is now worth between $50 million and $120 million.  She told PCMag that word of mouth has been a big part of the company’s growth.

“Ultimately, my belief is that the best marketing is creating a product that people are excited to talk about.”