Barbara Bush would not put up with your shit. Or mine. That’s why we love her. Along with Abigail Adams, she is the wife of one President and the mother of another. Historians often say without Barbara Bush there is no George Herbert Walker Bush, and so no Bush Jr. (Barbara always rolled her eyes when people said that. That’s so Barbara.) While many people may not embrace those two Presidents, there’s no denying respect is due to the non-nonsense, loyal and loving dame who made their destinies possible. 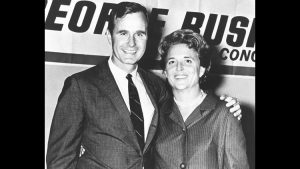 Barbara Bush married the only man she ever kissed. (Apparently this makes her children want to “throw up in their mouths.”) It was just a couple of weeks after Pearl Harbor, and the future First Lady met her future husband at a Connecticut country club dance. Barbara was wearing a red and green dress (it was a holiday party) that caught George’s eye. He asked to meet her…and the rest is, literally, history. (Barbara and George went on to have the longest marriage in Presidential history. It’s a long and deep love story.)

Her life may have been a privileged one, but it wasn’t an easy one. She gave birth to and raised 4 boys and 2 girls, one of whom, Robin, died of leukemia. Also, Barbara Bush ended up moving 27 times during her marriage to George! Her husband George traveled quite a bit. First he moved Barbara and the clan out West to Texas. Then George was elected to Congress, then he became an Ambassador to the United Nations, then he was Ambassador to China, then he was Director of the CIA. Of course later he was became Vice-President under Ronald Reagan, before becoming President himself. 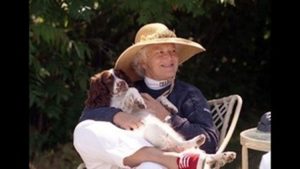 Dignified yet unpretentious, formidable yet unassuming, Barbara Bush became one of the most admired First Ladies in history. She also deserves a place in the Hall of Dame.  Barbara was a wise woman, comfortable in her skin. She was old school in a cool way (she never felt the need to dye her hair) and was modern where it counted. Barbara Bush was comfortable in the roles her generation had assigned to women, but she didn’t play those roles — she rocked them. She thought for herself and didn’t always go the way of her Republican brethren. She was pro-choice. Then there was the time she famously cradled an HIV-positive baby. “You can hug and pick up AIDS babies and people who have the HIV virus,” said Barbara. “There is a need for compassion.” An administrator at a facility that treated AIDS patients remarked, “You can’t imagine what one hug from the First Lady is worth. We’ve had so much trouble with all the talk about the dangers of personal contact. Here, the First Lady isn’t afraid, and that’s worth more than a thousand public service announcements.”

Barbara Bush’s damery is most evident in the way she lived her life. The way she lived and dealt with people spoke volumes. And so do her actual words. Barbara once advised incoming First Lady Hillary Clinton, “If they quote you, make damn sure they heard you.”

Here are some more quotes that are very Barbara:

ON SARAH PALIN: “I sat next to her once, thought she was beautiful, and I think she’s very happy in Alaska,” Bush said, before adding, “and I hope she’ll stay there.”.

ON SUCCESS: “You just don’t luck into things as much as you’d like to think you do. You build step by step, whether it’s friendships or opportunities.”

ON LIFE: “When you come to a roadblock, take a detour.”

ON STRENGTH: “I really built myself up, darn it, to be very strong.”

ON PRIORITIES: “Never lose sight of the fact that the most important yardstick of your success will be how you treat other people – your family, friends, and coworkers, and even strangers you meet along the way.”

ON HAIRSTYLES: “People who worry about their hair all the time, frankly, are boring.”

Mind of a Mentor Episode #67: Cher Cosenza, Cohost of…

Meet The Woman Behind SMAKK Studios, The Agency Making…

ON GIVING: “Some people give time, some money, some their skills and connections, some literally give their life’s blood. But everyone has something to give.”

ON LEARNING: “If human beings are perceived as potentials rather than problems, as possessing strengths instead of weaknesses, as unlimited rather that dull and unresponsive, then they thrive and grow to their capabilities.”

ON AGING: “Never ask anyone over 70 how they feel. They’ll tell you.”

ON FAMILY: “To us, family means putting your arms around each other and being there.”

ON HER HUSBAND: “One thing I can say about George… he may not be able to keep a job, but he’s not boring.” (She’s talking about George Sr, here, remember. Now that’s love!)

MORE ON GIVING: “Giving frees us from the familiar territory of our own needs by opening our mind to the unexplained worlds occupied by the needs of others.”

ON BELIEVING: “Believe in something larger than yourself.”

MORE ON AGING: “I have had great medical care and more operations than you would believe. I’m not sure God will recognize me; I have so many new body parts!”

AND ON MARRYING ONE’S WAY INTO THE WHITE HOUSE. “And who knows? Somewhere out there in this audience may even be someone who will one day follow my footsteps, and preside over the White House as the president’s spouse. I wish him well!”

That was so Barbara.

This article was originally published by Dixie Laite on Dametown.com. It has been republished with permission from the author.

Mind of a Mentor Episode #67: Cher Cosenza, Cohost of the Speaking…

Meet The Woman Behind SMAKK Studios, The Agency Making Socially…

Mind of a Mentor Episode #33: Jennifer Cullen, Director of…

Is Taylor Swift a “Fake Feminist”? The Divisive Rhetoric…